In my last post I alluded to what I called "bold iconographic expressions of power" at Villa d'Este in Tivoli. As promised, I have come back to turn this stone over.

Perhaps the best way to discuss the symbolism found at Villa d'Este is to take a look at some of the landscape's general qualities and its more significant garden features:

Scale and magnificence: As described in my last post, the gardens at Villa d'Este have conquered a small valley, spanning it with extensive terracing, paths, stairs, and rushing fountains. The scale and detail of the garden vanquish more than just the natural topography, however -- they also conquer the senses of each visitor that steps out the back door of the mansion. Forceful bursts of water, lush plantings, and intricate masonry exude a sense of power and seem to be dripping with wealth.

La Rometta: Stepping out on to the palace's Gran Loggia is breathtaking and looking out over the landscape below lets a visitor quickly grasp its immense scale. The western end of the loggia allows more distant views toward Rome, and if one lingers at this manmade precipice for a bit longer he or she may spy this curious garden feature below, which is described in translation as "The Little Rome." To a native eye, La Rometta's various sculptures, miniaturized river, and boat-shaped island appear almost as a dollhouse version of the Italian capital city.

Though the parallels have become a bit cloudier with time, the boat-shaped island in this section of the garden are a reference to one of Rome's more recognizable geographic features, Isola Tiburina (Tiber Island). From the vantage of the Gran Loggia and La Rometta, views to Rome are celebrated with a series of picture-window archways and railings.

Location and context: The same picture windows that face Rome have another layer of significance - in the 1550's, when Villa d'Este was being located and first constructed, the town of Tivoli was best known as the home of a different, thousand-year-old garden: Hadrian's Villa. There is an unmistakable message in locating one's estate farther up the hill from one of the Roman Empire's most celebrated emperors.

Vatican influences: In all fairness, it was the distinctly recognizable features of the Dianna Efesina fountain and another ancient statue that triggered my larger recognition of "inspired" sculptures at Villa d'Este. I had the advantage of visiting the garden within a day of the Musei Vaticani, and though the homages, interpolations, and straight-up copies pose no real threat to the well protected original pieces, it sometimes seems that Villa d'Este has actually pillaged the Vatican.

The backstory: Being selected as pope in the 16th century was defined by much of the same religious veneration that the position holds today, but the position also carried immense political powers that have since faded. The man who built Villa d'Este (or, more accurately, had it built) was Cardinal Ippolito II d'Este, son of a Cardinal and grandson of a pope. The garden was begun the same year that Ippolito was coming off a failed bid at the papacy, and it takes neither a historian or a psychologist to deduce that there was a bit of compensation at work in the creation of the gardens.

Landscape historian Elizabeth Barlow Rogers describes Villa d'Este as the product of "passionate obsession on the part of an owner willing to spend extraordinary sums of money and with the taste to hire the best design talent available," and the obsessive focus and ample resources are evident in every aspect of the garden. Like an example of "conspicuous construction" a bit closer to home, the fact that the motives may have been less than pure does not detract from the work's grandeur. 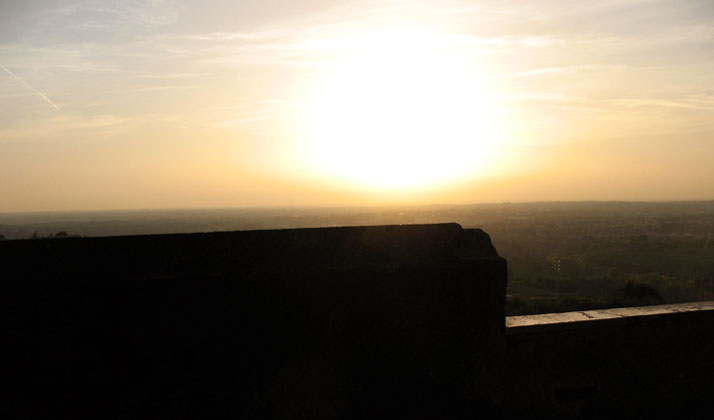